Sweden Hits the Abyss of Private Healthcare & the Customer Model 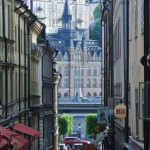 Our final week prior to returning to the U.S. was spent in Stockholm, Sweden. My husband and business partner Dallas Smith, who speaks fluent Swedish and has spent many years traveling and performing in Sweden, often comments on its richness in social services, including a healthcare system that tends to the Swedish population from birth till death.

And, this extends not only to healthcare services, but also to higher education, care for the elderly, and family leave for both of the parents of newborns. Yes, taxes are high, but people pay as they can according to a percentage basis.

Well, this is changing. In fact, two weeks ago more than, 3,000 physicians gathered to protest the handing over of management of the national healthcare system to a private management company. An editorial in the paper stated that the goal is to shift the concept of “person as patient” to one of “patient as customer.” Hard to believe, but these changes will move Sweden toward the American system we already know does not work.

The blindness of so many countries following America into a private system that objectifies patients and rewards sickness is disheartening. Granted, America has not yet fully launched all the aspects of health reform, but I think those of us who have had the benefits of healthcare without having to think about cost or choice still long for the current past.

The rest of us have looked at health insurance as either the highest bill we pay every month or the tab we simply cannot afford. Nonetheless, most Americans never really fully understand what having “it” means.

Many of us have high deductibles, co-pays that can run into the thousands if we are seriously ill and requisite referrals and approvals that mean seeing lots of doctors prior to diagnosis and treatment. Not to mention the ominous threat we feel when we are asked for our insurance card prior to making an appointment even for a routine exam.

So, Sweden, beware of the glitz of America leading you into a system we know is broken. Beware of trading your values and social ethic for expediency and economic profit — and, even more important, beware of losing your traditional and longstanding practice of caring for each other.  Because the only stability any society has is the physical, social, and economic health of its citizens.

During this international trip, I looked into the eyes of nurses and citizens of Israel, Jordan, Saudi Arabia, Egypt, Qatar, and Sweden.   The challenges of communities taking care of themselves are global. I am moved by the change-factor being seductive, drawing all of us into a better future and, at the same time, the change-factor breeding its own resistance.  One way or the other, change is in the now, it is happening, and it is happening everywhere.