When What We Believe, Know, and Practice is Not Enough

Throughout the history of science, long-held beliefs have been disproven by new empirical evidence. It was not uncommon for the new evidence to be fully rejected and the messenger to be vilified.

Now in the 21st Century, we too have our old ideas and beliefs to which we are attached and we too can be closed to new information.

The Actions Based on Resistance

Throughout the history of knowledge, new concepts and practices that refuted current beliefs or offered new or conflicting definitions to common understandings, have often been met with hardline resistance. Such resistance can look like the following:

There are many examples of current practices that are considered critical to patient safety that were initially met with strong rebuff. Further, history has shown that the doctor, scientist, or nurse who urgently offered a new practice in the effort to save lives, were rejected, sometimes humiliated, and essentially exiled from their professional communities.

It was true 150 years ago, 1000 years ago, and it is true today: Replacing long-held beliefs and practices with new insights, research, and data carries both a social and professional risk of outright rejection. History has shown this over and over again. 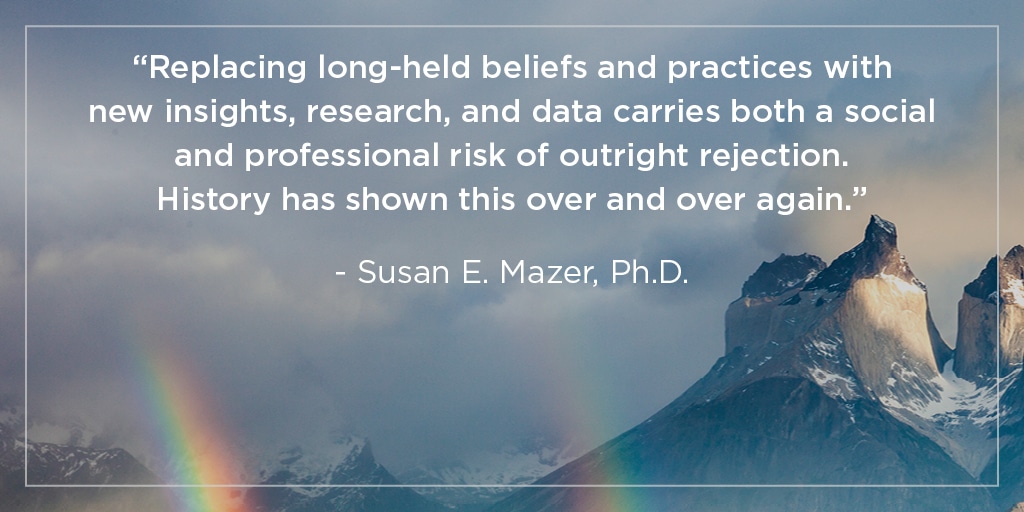 In 1848, Ignaz Semmelweis, a Hungarian physician, suggested that physicians doing an autopsy and then immediately delivering an infant could carry toxins that resulted in puerperal infection, also known as Childbed Fever. His discovery came after he studied why his unit at the women’s hospital had 25-30% more infant deaths than were occurring when women gave birth on the street. Following careful study of the entire birthing process, Semmelweis instituted a handwashing and sterilization policy that required hand washing and cleaning of all tools before any procedure was done.  This policy change resulted in the reduction in mortality rates from 18.27 to 1.27 percent, and in March and August of 1848 no woman died in childbirth in his division.  Nonetheless, he was met with ridicule, condemnation, and eventually lost his position and his sanity, having spent years trying and failing to convince his peers of his findings.  His colleagues could not accept that their own actions could lead to disease and/or death.  Semmelweis eventually died in an insane assylum on August 13, 1865, at the age of 48.

Around the same time, Louis Pasteur and Robert Koch put together the relationship between pathogens (germs) and disease, now referred to as “Germ Theory.”  This theory is the basis of microbiology and all medicine today, including vaccines, medical treatment, and disease prevention. Until we knew the pathway to disease, we did not know how to disrupt it. Still, it took four decades, from the 1850s all the way to the 1890s to finally accepted the concept of pathogens external to the body. I say “finally” because microorganisms were discovered in the 17th century. Nonetheless, if you want to know more about the current dismissal of science in the 21st century, check out germ theory denialism, which purports that rather than germs causing disease, disease generates germs. There clearly is room for both to be credible, but all studies current and historical have supported the germ theory. For a serious debate, you can find the full argument here.

“Not believing” is what Public Policy Researcher, Leah Ginnivan has termed the “Semmelweis Reflex,” the kneejerk rejection of new evidence contradicting established norms. And, so we continue to ignore new evidence which contradicts what we have believed our entire lives. Yet, science continues to reveal more and in greater detail how best to maintain our health, cure disease, and prevent illness.

(Note: I encourage you to read this article. Then, think about the COVID-19 deniers, the anti-vaxxers, and the no-mask population.)

During the COVID-19 pandemic, many of us found ourselves struggling between our beliefs/expectations, our wanting to “know”, and the false equivalence between COVID-19 and the flu (influenza). On top of this, public health officials who outlined “safe” social behaviors that would minimize the risks of becoming infected were accused of trampling on individual liberties. It remains difficult to accept as fact that each of us could inadvertently pose a life-threatening risk to those around us if we are not vaccinated or proactive in our defense against this virus.

In the January 21st issue of Chemical and Engineering News, Ryan Cross wrote, “The confluence of rapidly evolving science, mixed messaging, misinformation, and flagrant politicization in the U.S. is creating a perfect storm for eroding trust in science.” The justification behind rejecting any or all COVID regulations was not only a lack of trust in science, but also in the CDC, public health, and in all government agencies. Unfortunately, this sentiment continues with the anti-vax movement.

We will never know how many people died or suffered needlessly. What we do know is that wearing a mask, social distancing, and the lockdowns helped us avoid an even greater death toll. At this time, with so many vaccinated, the number of infections and deaths has dropped dramatically. However, we are being warned that COVID is not gone, will continually mutate, and we must be vigilant.

Still, we have those who deny the legitimacy of recommendations made to end this pandemic while summarily dismissing the reality of COVID and the pandemic itself.

How to Make Room for What We Do Not Know

It is time for everyone who cares for patients to look at their own position regarding new science versus current practices. All of us fight for our own relevance and what we have known to be true. But truth in science is hardly absolute. There are always exceptions and change is imminent.

Those of us who are well informed on the scientific method and the value of solid research must create room for “what we do not yet know.” The still undiscovered laws of nature represent a far greater body of knowledge in potential and possibility than the limited facts we have confirmed to date.

The best clinicians learn from each patient and every encounter, assuming that what they do not know is a greater body of knowledge than what they know. There is often greater insight found in a single anecdote from a patient than in the statistical summaries of double-blind studies.

The C.A.R.E. Channel, having celebrated 29 years this month, was originally met with skepticism. I remember when we suggested that creating a healing environment at the bedside would improve outcomes for both patient and nurse, the response was both “of course!” and “where’s the proof?” To trust the obvious is not considered valid science. However, to ignore what is in front of us is also not valid.

Thus, we went on a search (we are still on) in a variety of disciplines related to C.A.R.E., including evidence-based design, environmental psychology, and much more. We pointed out that C.A.R.E., which provides both soothing instrumental music and natural landscapes, creates an environment of caring, not only care. Following the work of Florence Nightingale, we have continued to advocate for an environment that is itself a caregiver, that is comforting and adapts to patient’s needs.

The healing environment in concept and practice is now, in 2021, mainstream. Finally, as we go into our 30th year, C.A.R.E., nature and music, has been accepted as a valuable component of that environment.

The work ahead for all of us is to become uncomfortable with our own complacency and over-confidence in our existing biomedical models of care. Sometimes we are so invested in “what we know” and believe that we become blind and deaf to what else is happening right in front of us. We must question our own unyielding attachment to our own opinions when, as in the case of COVID-19, what used to work failed.

Patients and families will share their fears and doubts, their pain and angst, none of which is relevant if what they say to us is not heard and talked about. In fact, what they share only has meaning if we choose to hear them and reflect on actions that are indicated.

I encourage you to help your patients, your neighbors, your colleagues, and others get used to the ambiguity of not knowing. None of us live in an absolute universe where everything fits neatly or correctly into a drug, surgery, diagnosis, prognosis, or belief.

The advancements made in medicine based on the work of Pasteur and Koch and others should have exponentially improved human outcomes. Frustrated with how many more lives could have been saved, Emergency Room Physician, Dr. Mark Mosely recently wrote “… strangely, germ theory, as cataclysmic of an idea as any, did not effectively change disease incidence or mortality. Even when our ideas approach divinity, human beings tend to remain stubbornly entrenched in only what we have believed, and we believe only in what we choose to see. Humans and their habits have not evolved much.”

Ask questions. Respect the many contradictions that confront what we think and believe. And, be open to the mystery of all we do not yet know.

Note: Check out my blog on non-compliance with handwashing.