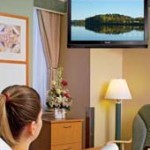 Years ago when we were doing educational workshops and performing concerts at hospitals, one of our clients was a non-profit psychiatric facility that had both inpatient and outpatient services. They asked for music for their waiting room because admitting was practically in the same area instead of patient television. Confidentiality was the motivation.

Generic commercial background music was not what they wanted. As a result of this first request, we founded Healing HealthCare Systems and began producing The C.A.R.E. Channel.

Several years later, on a visit to the same hospital, we stopped in to visit our main contact as a courtesy. And, while we were warmly greeted, we had to wait in the waiting room before seeing her.

Changes had taken place. First, the C.A.R.E. Channel was still being used in the inpatient areas. But, a television now dominated the small waiting room. And on this day, in this waiting area in a clinic that served a variety of levels of mental health patients, a psycho-drama was playing.

I still wonder who had decided that a scary movie that had demons playing out in real time was healthy for a psychiatric patient waiting for his or her weekly meeting with a therapist.

Commercial television programming is not necessarily entertaining to patients on medication who are consumed with concerns about their own prospects for recovery, and for whom life has come to a stop. They are also vulnerable to the hardcore realities that television visits upon us on a daily basis.

When I was unexpectedly hospitalized recently, television was an irritant, upsetting, and, actually, intolerable. There was no alternative in this hospital that I’d been taken to when my health crisis happened. It was either the noise of the TV, the noise of the hospital, or an unnerving silence.

The C.A.R.E. Channel was and remains the alternative to commercial television programming that is indifferent to human suffering.

So if commercial television is blaring in your hospital waiting or patient rooms, think about whether the programming being broadcast is appropriate or annoying and remember that there are alternatives.