What Happens When Patient Pain is Dismissed and Under-Treated? 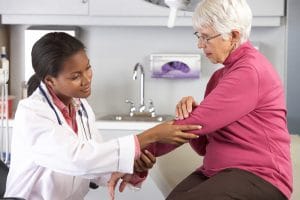 This month, at the Beryl Institute Patient Experience Conference in Chicago, I was speaking about pain management and the patient experience.

In the past 15 months, I’ve been researching the long history of patient pain as it has driven both medical and nursing practice, exploring the patterns of understanding and treatment that have resulted in the current Opioid Epidemic.

Women Not Included in Clinical Trials Until 1993

Last week, NPR reported on a new book by Maya Dusenberry about how women have suffered from misdiagnosis and mistreatment by the U.S. medical system.  Women were not included in clinical trials until 1993 when the National Institutes of Health required they be included.

And, the system dealing with women’s health issues has, historically, been a male-dominated system.

To this day, minority women are often under-treated for pain. In addition, the elderly and racial and ethnic minority patients can also find themselves experiencing pain that is not relieved.

In fairness, the reasons for under-treatment may be related to under-reporting on the side of the patient, which is caused in part by cultural beliefs and expectations.

However, in the current healthcare environment where we are facing this seemingly unsolvable pandemic of opioid addiction, the swing towards far more conservative treatment may again result in unnecessary suffering.

This issue is neither new nor unsolvable.  What is required, however, is far more than protocols and scientific data.

Pain, as a human experience, historically has been both a mystery and a sufferance, causing confusion while demanding treatment.  Pharmaceutical companies, which saw a substantial opportunity to make millions (maybe billions) of dollars, entered the foray in the middle of the 20th century.

Aspirin remains the most well-known over-the-counter analgesic.  However, once Tylenol, NSAIDS (with Codeine and antihistamines), and more entered the market, self-diagnosis and treatment became more common.

The results have been mixed, with some not experiencing the best relief and others overusing and discovering subsequent side effects.  As is known, self-medicating has its limits and its risks.

Progress in the field has also resulted in a common use of much stronger narcotics and their synthetics, which have become the drugs of choice to treat patient pain due to their short time to total effectiveness.

While street drugs have escalated, deaths from overdosing of prescribed medications supported by ongoing supplies from physicians, have also increased.  At this time there is more control at pharmacies regarding controlled drug dispensing.

However, it is common knowledge that if one wants any drug, it is accessible, legally and illegally.

Basically, the solution to pain became pain-relievers, which then became the problem, feeding into situations that are worsened, life-threatening problems.  It’s the perfect definition of an addiction.

Pain is not a sensation (like smell, touch, or site).  Pain is felt internally; heat or stench comes from something and is responded to. Causes are of pain are not always obvious.

We know that aches, where they seem to hurt, may come from another part of the body entirely.  We also know that a simple event, like stepping on a pebble, may be mildly irritating to some and extremely alarming to others.

This observation is what inspired Ronald Melzac to come up with the Gate-Control Theory of Pain, which suggests that external stimuli trigger a series of nerves, which then travel to the brain. It is the brain, then, that tells us if we hurt or not and how much.  And, the family and community in which we live, the social expectations and attitudes about pain and illness inform whether or not we will ever tell anyone that we hurt and how much we hurt.

Thus, Melzac theorized that the power of the mind actually controls our pain experience and, in some cases, controls the pain itself.  He suggested further, and studies have shown, that the use of positive distractions, such as nature, humor, and drama can serve to relieve pain.

This was confirmed by Norman Cousins, author of The Anatomy of an Illness, who suffered from crippling pain. In his book, Cousins described being able to experience two hours pain-free for every 10 minutes of genuine laughter.

Pain is complex and the opportunities to relieve suffering are diverse.  Acute or unresolved pain may require analgesic drugs, but the amount can be minimized if other modalities are also included and patients understand how to increase their own coping skills.

Without question, end-of-life pain from cancer or other serious conditions may only be relieved with high doses of medications meant to handle such extremes.  Most of the time, however, pain is less intense, shorter-lived, or chronic, with varying states of acuity.

Pain is Our Personal Alarm System

Pain demands attention — without which, it may disappear or get worse.  It motivates us to take action, either stopping what is causing the pain or changing our behavior.

Again, it is not a sensation but may be experienced as if it is.  Attempts at using words to convey the experience of pain fail to accurately describe how our pain feels and fail even more when we try to understand the pain of another person.

My own pain has been dismissed by family and physicians, and I have dismissed the pain of others.  I have found myself reluctant to empathize with ongoing chronic complaints that seem to be manipulative rather than medical.  I better understand “This REALLY hurts,” than “10-out-of-10” pain.

When I was in the Emergency Department of a Las Vegas hospital having collapsed on a Southwest flight, the doctor was frustrated with me, asking why I took so long to come in.  I had E Coli Septicemia.  I had no answer.

I have felt shame and embarrassment about being sick, having a rash, getting shingles, having a debilitating headache, having a crippling backache that makes me “walk like a duck,” and feeling sick to my stomach in the back seat of a car.

What’s Your Experience of Pain?

How do you experience and report your own pain?  How do you value pain tolerance and how much tolerance is reasonable to expect?

Do you find yourself being empathetic or dismissive of the pain of others?  Of yourself?

How bad does it have to get to tell anyone?

Questions about pain often guide how insurance companies pay or reject claims, and how physicians and nurses make decisions on a daily basis.

They are worth considering and reconsidering.  And, these questions arise daily, with decisions being made all the time.