Ethos, Conscience, and The Patient Experience 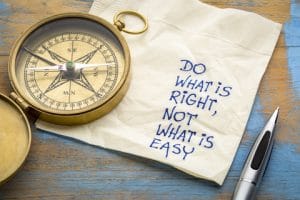 It’s possible to argue that these three concepts have little in common. On the other hand, they are so blended that healthcare providers cannot excel without considering all of them.

I have long written and spoken that providing a therapeutic environment — one that addresses both medical and non-medical needs of patients and families, is an ethical obligation. That placing patients in rooms that feel like prison cells when they are already victims of their condition is almost immoral.

“Almost” because the details of their situation perhaps can give way to understanding how this happens — nurses who have too many patients to care for, under-funded community hospitals, and overcrowded emergency rooms where so many patients are placed at the bottom of the list.  These things tug at the conscience of the whole system.

“Conscience,” what sits on our shoulders and lets us be most uncomfortable with that which conflicts with our sense of rightness, is formed prior to medical or nursing school and prior to applying for any job. It should show up every day, every minute.

But it is not talked about in relationship to healthcare or the patient experience.

An environment that is emotionally toxic, that is cluttered and without any evidence of human caring, begs the sense of doing what is right to fix it for those who know how it’s affecting patients.  That’s conscience.

What’s the definition of conscience? Here’s what I found:

CONSCIENCE
noun
1. the inner sense of what is right or wrong in one’s conduct or motives, impelling one toward right action: to follow the dictates of conscience.
2. the complex of ethical and moral principles that controls or inhibits the actions or thoughts of an individual.
3. an inhibiting sense of what is prudent:
I would do ______but my conscience would bother me.

With its call to address the whole patient and be sensitive to the details of the lived-experience, the patient experience movement demands conscience. And it shouldn’t just become one more requirement of healthcare workers’ jobs. Like being honest, civil, or considerate.

When nurses see patients suffering, doing what is necessary (which may involve taking steps that are inconvenient), is a moral imperative and part of their professional ethics.

When a housekeeper finds a patient stuck in a bathroom because he or she cannot stand, getting help or helping, taking immediate steps is a human act of conscience and caring.

The “ethos” of an organization is the fundamental character or spirit of a culture; the underlying sentiment that informs the beliefs, customs, or practices that define who you are as part of a healthcare organization. It is evidenced by the day-to-day assumptions you make and your expectations of others.

Prisoners are Patients Too

The New York Times recently reported on terminally ill prisoners who are no longer a danger to society being denied compassionate release so that can die with their families.

From the article: “Officials deny or delay the vast majority of requests, including that of one of the oldest federal prisoners, who was 94, according to new federal data analyzed by The Marshall Project and The New York Times. From 2013 to 2017, the Bureau of Prisons approved 6 percent of the 5,400 applications received, while 266 inmates who requested compassionate release died in custody. The bureau’s denials, a review of dozens of cases shows, often override the opinions of those closest to the prisoners, like their doctors and wardens.”

These prisoners are patients in a different system.  But in every community, patients may die alone because their families are elsewhere; the homeless often die on the streets within blocks of hospitals. Children may be left alone in a family shelter.

Healthcare providers cannot fix all of this, but they should be able to address what they see right in front of them.

Doing What is Right

The ethos of a healthcare organization and its community are its assumptions about what is right, fair, and life-supporting. Conscience nudges individuals and organizations when their actions or inactions are in conflict with what they know is right.