The Patient At Risk: Ever Hear of Germ Theory Denialism? 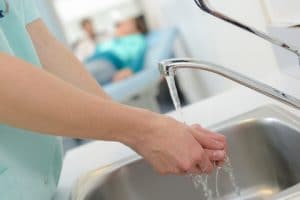 I had never heard of Germ Theory Denialism, either.

When Louis Pasteur theorized that “germs” caused disease in the 19th century, he and Florence Nightingale had a rigorous debate. The belief that bad air from pollution, exhalation from the lungs of the ill, and unhealthy vapors caused disease had held since the Greeks.

In fact, Nightingale’s environmental theory was based on this same belief. Thus her hospital design included well-ventilated wards, lots of sunlight, and cleanliness of patient and their environment.

When John Snow, the accepted founder of epidemiology, claimed that cholera was waterborne, he supported the idea that microorganisms entering the body and going from person to person was the source of the epidemic. This argument was used by manufacturing companies who were being blamed for cholera because of the noxious-smelling exhaust coming from their factories.

Well, the truth as of today is that both theories are true and often work together.

Still, there are many smart people who do not believe in germ theory. They won’t vaccinate their kids and believe that a good diet and healthy living will keep every single person healthy.

Hand Washing is the Best Prevention

Denying that germs cause or spread disease can show up in ways that are not subtle.

For example, hand washing has been acknowledged as the most effective method to prevent infection and the spreading of disease. Not washing one’s hands puts everyone at risk.

This is the work of Dr. Ignaz Semmelweis, who discovered in 1847 that handwashing with a sterile detergent stopped infant deaths from child-bed fever by 10 fold. However, his colleagues rejected his findings because the methods he used to come to this conclusion were not up to scientific rigor.

Today, we know that Dr. Semmelweis was correct in his assumptions. Yet according to a Center for Disease Control survey published in 2015, there is still only about 40 percent compliance with handwashing by staff in hospitals.

Alas, whoever has hands, must wash them.

The study also showed better nurse compliance with better patient handwashing compliance.  The results were significant but could be better because patients’ hand-washing three times a day is not the same as what a nurse, aide, or physician must do.

Not Even Close to 100 Percent

So, with evidence-based medicine now a standard, why is it that the healthcare industry can’t achieve close to a 99 percent rate of adherence to a protocol that clearly saves lives?

Germ Theory Denialism is risky for everyone when it prevents individuals and families from actively preventing contagious diseases from spreading.

Efforts to encourage hand washing — including placement of sinks in patient rooms and the use of alcohol rubs — have resulted in improved compliance.  However, the healthcare industry is not close to 100 percent yet.

Since 2004, the Joint Commission has considered hand hygiene in its accreditation process. According to a recent article in Modern Healthcare, this year it will begin issuing citations to healthcare organizations if surveyors see an employee not following correct hand hygiene protocols.

Perhaps this action will help get the industry to 100 percent compliance. But shouldn’t people the fact that patients are dying of infections that could be avoided be enough incentive?