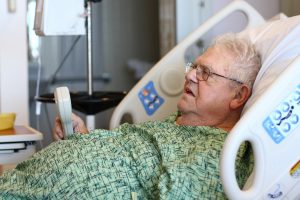 There are many theories about how the violent television programs influence teenagers and adults — how they might desensitize us to horrific events. However, there is little discussion about the effect of violent news, programming, or commercials on an acute care patient.

A medicated or semi-conscious patient’s perception is, at best, compromised.  And, his or her sensory system is slower to respond or may be hypersensitive.

What looks too bright may be normal daylight; what sounds too loud may not be; what sounds violent might be a sitcom on the hospital television.

Words are not heard through normal ears.  They are heard through pain, fear, and stress.  In elderly patients,  cognitive decline, hearing impairment, and any number of other issues may also precede them.

The role of hospital television in the patient experience is unique and fickle.  During the day, it can be a welcome distraction for those who are well enough.

At night, the hospital television is hardly friendly, and worsens the long hours of darkness.  To the most acute patient, the television programming that is not fully comprehended can be alarming, confusing, and agitating.

Also, a hospital room is not a hotel room.  The patient is not on vacation.  When it is on, the television can dominate the patient environment.

However, when a patient is not capable of choosing or understanding programs, the staff should ensure that the television is not hostile to recovery.

The potential negative impact of television programming and the need for a positive distraction and soothing environment is what inspired us to create The C.A.R.E. Channel.  And, that is why it is a 24-hour, continuous play channel.

Patients can turn C.A.R.E. on and don’t have to deal with the remote to find another program at the end of every hour.  There are no commercials or interruptions.  No disturbing talk TV at night, just soothing music and a midnight starfield.

Florence Nightingale taught us that creating a healing environment is about both providing for the comfort of the patient and protecting the patient from distraction and intrusion.

And, yet, the hospital television seems out of bounds.  Often, when family members come to visit patients, they take over the television as if they were in a hotel.  They may turn up the volume for their own listening when the bed speakers are meant and designed for the patient.

We received an email recently from a woman whose mother was in a hospice that had The C.A.R.E. Channel.  She wrote that it was very soothing to her and calming to her mother. She observed that when her kids came in and changed the channel to regular TV, her mother seemed restless.

It’s good to include broadcast media as part of a healing environment.  But it’s also up to hospital administrators and staff to be aware of the impact of television content on the patient.

And, know that however it seems, that is how it is.  The television is fickle, moving at any time from friend to foe.