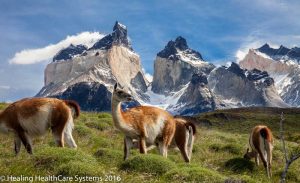 Twenty-five years ago in June 1992, my husband Dallas Smith and I launched what was to become The C.A.R.E. Channel.

We met through Rising Sun Records in 1984. However, I’d already been involved in working with nurses through the Center for Health Awareness in San Jose, CA.

It was beginning this work that drew my attention to using music in a different forum. I’d been performing as a jazz harpist in San Francisco and Lake Tahoe for years.

During the same period, Dallas was recording in the San Francisco Bay Area with Steven Halpern, a composer and producer who is considered the original pioneer of New Age Music.

After Dallas and I met, I took that first workshop I’d done for nurses and rewrote it for students, K-12, as a drug abuse prevention program, which we did for 10 years, working in schools in Georgia, California, and Nevada. We also worked with the Center for Peace and Conflict Studies at Wayne State University.

For over a decade, Dallas and I performed together at Harrah’s in Lake Tahoe, played on cruise ships, did some college tours, recorded, presented workshops for nurses on the use of music as environmental design, and taught drug-abuse programs. We drove cross-country, hospital-to-hospital, school-to-school.

In 1992, following our work with the clinical staff at The Bradley Center, a non-profit psychiatric hospital in Columbus, GA, they asked us if we could provide music for their lobby waiting area, which was right next to Admitting.  From our workshop, they knew that music is one way to mask conversations and calm waiting patients.

We wanted to deliver what they had asked for.  However, to do so, we had to quickly bring together what was a vision into reality, contract and all.  The music, we decided, should be original, non-commercial.  Not too passive, nor too active.  Engaging.

At that time, our music was also being used at Washoe Medical Center (now Renown Regional Health System) in Reno NV, delivered through the patient television. However, the photographer who provided nature slides to go with the music only had enough for 20 minutes.

That was when we decided to produce our own nature video and music programming that was specific to patient needs.

In the beginning music on The C.A.R.E. Channel was just our own recordings, but we soon approached other artists whose music was compatible. Clearly, ours was not enough for so many reasons.

Where We Are Now

Twenty-five years later, we’ve gone from providing a set of 25 two-hour VHS tapes to one or two hospitals to offering 84-non-repetitive hours of high-quality HD content to more than 1000 hospitals and healthcare facilities in the U.S. and abroad. And, there are now more than 80 composer-artists who have licensed their work for The C.A.R.E. Channel.

Eighteen years ago, we began offering C.A.R.E. with Guided Imagery. And we continue to push the envelope for our programming, exploring ways in which we can produce virtual reality content.

Dallas and I didn’t hire any other employees for the first 11 years. Now we have a staff of 19 dedicated and skilled employees who are passionate about creating healing environments for patients, family members, and staff.

Our first hospitals are still with us: St. Luke’s Episcopal in Houston TX (thanks to Tali Neumann) and Barton Memorial Hospital in Lake Tahoe, CA (thanks to the late Mae Chester and Annetta and Robert Chester). They have each had The C.A.R.E. Channel for more than 23 years.

Every innovator depends on those early adopters, and we had a few that became many.  We greatly appreciate them to this day.

The ongoing relationships we have with all the hospitals, healthcare facilities, and clinics that have become our partners along this journey are invaluable to us.

There have been many changes in healthcare in the past 25 years. To celebrate our anniversary, we’ve created an interactive timeline of company milestones and major events that have influenced healthcare since 1992.

And yet, through all the changes, the mission to care for the ill and those who care for them will always be present in healthcare. We share that mission.

To inform our work, we continue to look into the current studies in social psychology, environmental psychology, media psychology, and other related studies. And while hospitals continue to be the primary place people access C.A.R.E. Programming, we know that is changing as well.

The future is full of possibilities.  We can’t wait to see what the next 25 years brings!