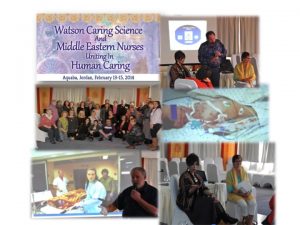 The Middle Eastern Nurses & Partners Uniting in Human Caring conference in Aqaba last week moved in the direction in which it was faced: sharing of vital experience while looking at the challenges of providing nursing care in this part of the world.  The differences in core beliefs are set aside in the acceptance of shared core values.

This is what feeds hope and becomes grounded in human caring as means of returning to our shared humanity.

The stories shared by nurses from the Israeli borders with Saudi Arabia, Lebanon, Jordan, and Egypt; the Palestinian nurses who must deal with the many health issues that show up within the Palestinian territories; and the nurse educators who work to raise the quality of care through direct education who are vital to understanding what is happening here.

The pictures here show wounded Syrian children being cared for by Israeli nurses.  The care is being driven by nursing.

In the meantime, Hadassah Medical Center in Jerusalem has declared Chapter 9 bankruptcy. According to the newspapers and reports from some of the staff, funding was mismanaged and eaten up by corruption.

Hadassah Medical Center is the most prestigious medical center in the country and known globally for its research and medical innovation. Here, the nurses were on strike because they had not gotten paid since January.

During the strike, some nurses had either slept in the lobby during the strike or continued working.  The commitment to the patients and Hadassah is notable but how they are treated is not at par with the invaluable care they provide. 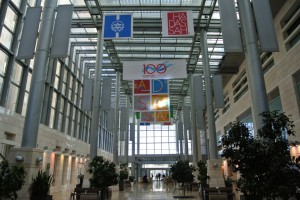 We visited Hadassah Ein Kerem, invited by one nurse and two nurse educators that we met at the conference.  The original hospital was built in the 1960s. The new tower (right) opened last year.  The contrast is stunning.

Our hosts reported that the strike is over although details were not clear.  Nonetheless, they said that patients were not being sent to Hadassah because the physicians are still on strike for their malpractice insurance lapsing as premiums were not paid.  As I update this, this has also been resolved.  For the past two weeks, physicians were on “Shabbos Schedule” which is limited staffing.

I am not sure how all of this will be resolved, but I am confident that some kind of economic structure will be developed to allow Hadassah to resume it research and high quality of care. Lots of blame to go around and, as it is in all of healthcare, patients and families are caught in the middle.

What I come away with from this trip to Jordan and Israel is a keen sense of the gap between economic and political pressures, on one side, and the ongoing human needs on the other.

Nurses are called in to relieve suffering, to see each person in their full humanity, and to value each human life.  Unconditional commitment and skill to improve the quality of health and healing do not mesh well with any healthcare system that must barter politically or economically.

In the Middle East where tensions reside in every breath, where you can feel it in the air, the nurses rise to meet the needs as they show up.  These amazing nurses show up in service to the mission of human caring without hesitation or question.

From their perspective and what I have come to know, peace has its birth at the bedside. There, the nurse and patient are partners in healing and their shared humanity is more vital than their differences.