I am a composer-singer-songwriter currently living in Beaufort, SC. Being drawn to music my whole life, I left my childhood home in Northeast Ohio at age 18 and ventured to the music mecca of Nashville, TN where I would spend the next 20 years as a working music professional. 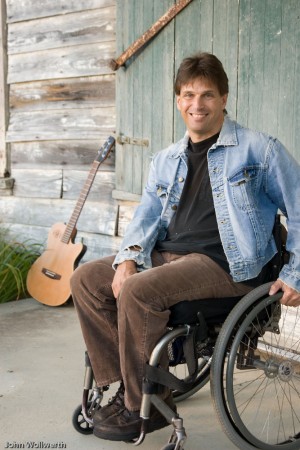 Opportunities were fruitful, as I was involved in various aspects of the music business, including live performance work backing major label artists on the road and touring. In addition to songwriting and producing, I was also a studio/session player.

Ready to begin a new chapter in life, in the early 2000s, my wife and I relocated from Tennessee to the Rocky Mountains, settling in the higher elevations above Boulder Colorado.

Living in such gorgeous surroundings, much of our first year there was wonderful. Being very active, we were able to partake in all of the various activities one can find living in such a place.

In September of that first year, my life totally changed. Part of my daily routine was to engage in some type of physical activity. One particular day, I climbed on my bicycle to head out for a familiar ride in the area surrounding my home. Just a short distance from my house near the end of my ride, I was hit head on by an oncoming vehicle, crashing through the windshield and falling to the dirt road below. I sustained multiple injuries from the accident and nearly died at the scene.

Sliding into a coma from the shock and trauma, I was taken via life flight to Denver General Hospital’s emergency room where, four days later, I awoke to a whole new life paradigm. Of the multiple injuries I had sustained from the accident, a spinal cord injury left me paralyzed from the chest down.

In addition, my left hand was severely damaged, putting into question my chances to ever play guitar again. It was only after several surgeries and extensive rehab that I was able to play guitar again a year and a half later, and close to three years before I recovered enough diaphragm control to sing.

I came to know The C.A.R.E. Channel when I was in Craig Hospital during my initial three months of recovery. Thanks to Terry Chase and her department, The C.A.R.E. Channel was part of the therapies available to inpatients like me during our stay at the facility. I would play The C.A.R.E Channel as a means to relax and center myself to the new paradigm of life I had to embrace.

In addition, it was easy to gravitate to the content since it was similar to the type of music I also composed. After my recovery, I contacted Dallas Smith at Healing HealthCare Systems and asked if I could submit some of my compositions for consideration in being part of the programming on the channel.

The road of recovery is still ongoing. Because the snow was not a good fit for my wheelchair, my wife and I left the Rocky Mountains and headed to the East Coast to begin again. We settled into a small coastal town rich in history and charm. Since relocating, I have been blessed to be back doing music full time and keeping a very full calendar of dates and performances.

In addition to the instrumental albums “Higher Ground” and “Journey of the Soul,” my latest release is a vocal project titled, “Beyond This Place,” a collection of spiritual titles reflecting my thoughts on this life and beyond.

Currently I am working on another vocal project as well as laying tracks for a third instrumental CD due out in the near future. All releases are available through my website, www.cpaul.com, as well as most major online music retailers.

Life as it is can turn on a dime and you certainly never know how any given day is going to end.  I am living proof of that. Because we live in very busy and over stimulating times, the important moments in life can get pushed to the back burner as we embrace the latest distraction.

I doubt any of us will be mindful as we draw our last breath that we had a 55″ plasma TV, fancy car, or some other prize possession.  The moments of engaging with people, places, and meaningful events in our lives will be what we cherish most- and likely those memories will be wrapped in music or songs that define those moments.

As for me, I’m grateful to still have the chance to share a song or two for all those who will listen.