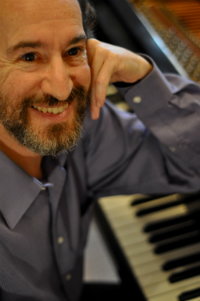 I was an active jazz piano player in New York City when my own healing crisis brought me to the benefits of meditation and the redirection of my music towards healing and transformation.  Although my jazz career continued with this emphasis, a new music also emerged based on deep relaxation and healing.

I began to work with healers and to play for meditation classes, which led to the creation of many recordings specifically for healing.  In the mid-1990s I heard about Healing Healthcare Systems (HHS) and sent some CDs for possible use on The C.A.R.E. Channel.  It turned out that HHS founders Dallas Smith and Susan Mazer had also come to their healing music from a jazz background and that we have a lot in common!

I’ve had the pleasure of meeting Dallas and Susan a couple times in the last few years when they have visited the Asheville, NC, area where I now live.  The highlight of those meetings was getting to play with Dallas!

What have I learned about creating music for healing and transformation?

It’s is a two-part process.  First an intention is set. This could be very general, such as “I ask for music for the highest and greatest good for a particular person or group.” Or, it could be more specific such as “I’d like to create music to help people feel more relaxed in a doctor’s waiting room.”

The second part is receiving the music that answers the intention/question.  This requires a deep inner listening, a surrendering of any resistance to the intention, and finally the skill to write, play, and/or record the music.

By surrendering resistance, I mean a continual refocusing of attention on the intention and on the music as it emerges.

This process is very similar to finding creative solutions by inviting inspiration; we ask a clear question, intuit an answer and then implement the solution.  Music that reflects this process expresses an inner alignment that can be felt by the attentive listener.

It was just this process that began my newly released CD with The Pure Heart Ensemble, “Bliss of Being.”  I had been feeling some emotional distress and at the same time was wondering about what to do for my next album.  I sat down at the piano and asked for music for healing for myself and the listeners of the next album.

Music came that had such beauty that my breath opened up and relaxed just hearing it!  This became the first song, “The Bliss of Healing” on the CD.  Sensing that this was to be more than a solo album, I invited four musical friends to participate on cello, flute, wordless vocals, and crystal bowls.

Each one of us had to surrender issues coming up and refocus on the intention and music to complete our parts in the recording sessions. This resulted in the creation of a heart-space in which supported recording music of sublime beauty.  This heart-space was on my mind after the recording was finished as we agreed to name the musical group “The Pure Heart Ensemble.”

Composer, keyboardist, and recording artist Richard Shulman has, since 1984, dedicated his music to the expression of love and the awakening of inner joy.   Richard uses his extensive background in classical, jazz and meditative styles to create music to assist audiences to remember their own spiritual essence.

He has created hundreds of Musical Soul Portraits for individuals, couples and groups; has produced 24 recordings available through RichHeart Music; and has performed at the Weill Recital Hall at Carnegie Hall, the United Nations, and numerous venues throughout North America and in Europe. Richard can be reached at 828-658-9604 and www.richheartmusic.com.