Wrong Music in the Operating Room is Risky 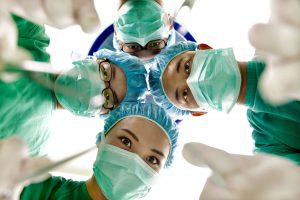 Can listening to the wrong type of music cause accidents or medical errors? The Israeli Daily paper Haartetz reported this week that Warren Brodsky, Director of Music Psychology in the Department of the Arts at Ben-Gurion University of the Negev, found that music effects mood and attitude which, in turn, effect driving.  He’s detailed his findings in a new book, Driving with Music: Cognitive-Behavioral Implications (Ashgate Publishing Company).

The relationship between music, attitude, and behavioral outcomes remains elusive in our collective knowledge. And yet, the ways in which we process and respond to auditory information is consistent — because no matter what the sound, we always respond physiologically, psychologically, cognitively, and emotionally.

If we perceive it (hear it), we respond.

The crux of Brodsky’s theory is that when driving a vehicle, the most appropriate music is moderate from the standpoint of emotional intensity — neither too bad nor too good.  Anything that distracts the driver from paying attention the complexities involved in driving is risky.

Now, let’s talk about healthcare.  About complex medical procedures, such as surgery — during which physicians and nurses are communicating critical information to one another. Distractions are risky in the operating room, too.

The Huffington Post reports that research has shown that the use of music is chosen by the surgeon 62-73% of the time.  And, that the genre most chosen is classical music.

Surgeons also report that having music makes them focus and perform on a higher level.

However, “music” is not a generic term.  Music that is distracting, alarming, too loud, or too aggressive can pose a risk to the concentration and accuracy of those performing complex procedures.  Music that has strong or contentious lyrics can also compete with communications between staff during the surgery.

One surgery, one surgical suite, one lead surgeon, one patient.  Everyone hears everything.