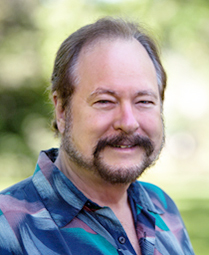 Born in Columbus, Georgia, Dallas Smith attended Florida State University and then went on to study in Germany, India, and Sweden. Following schooling, he performed as a woodwinds jazz musician in the San Francisco Bay area, India, Japan, and Europe.

From 1987-1992, he was the chairman of the Department of Recording Studies at Sierra Nevada College in Incline Village, Nevada. Dallas has taught CEU and CME courses for nurses and physicians since 1989, including multiple sessions at the Texas Medical Center in Houston, Texas; St. Charles Medical Center in Bend, Oregon, and Union Hospital in Lynn, Massachusetts.

In addition to his work in healthcare, Dallas is still a professional woodwinds jazz musician, working with his wife Susan Mazer. Their music has been featured on NPR, the Discovery Channel, and NOVA. Dallas and Susan are the founders and sponsors of the Elder Care Concert Series in Reno, Nevada, which is administered by the Sierra Arts Foundation.