Palliative Care and Hospice: Walking With Us To the End of the Path 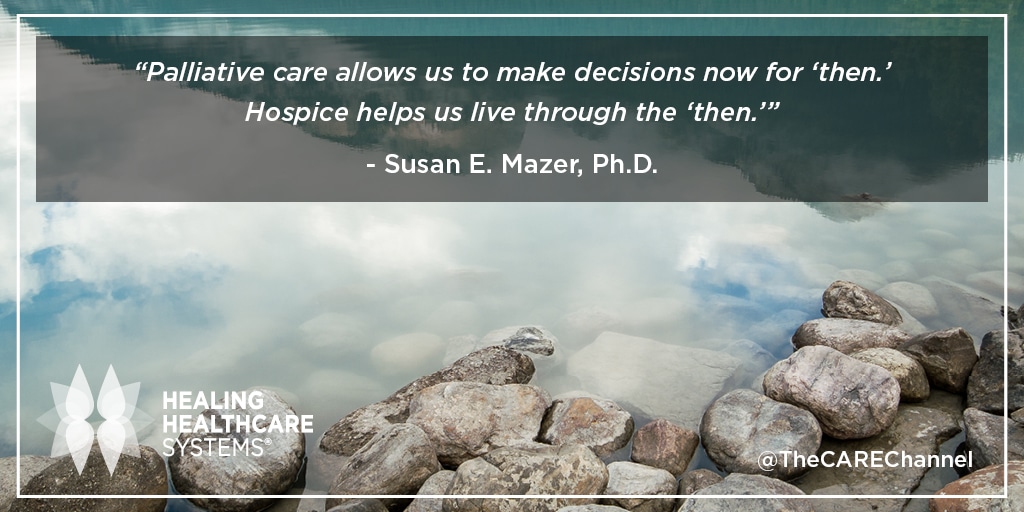 Years pass without much notice, especially as an adult child realizing how our parents age. For us, they seem to stay the same for years and years… then, as if overnight, they are old. They are more frail, slower in responding to us, unable to fully understand all that is going on around them, and, they are frightened.

When my father and Dottie, his wife of almost 20 years, came to the point of suffering from their suffering each day, none of us knew what to do for them. Full-time live-in help had shown itself to be extraordinarily expensive. And, Dottie was not so comfortable with another woman in the house.

Indeed, advice from any of us was neither wanted nor requested. In fact, we became an annoyance, intruding in ways that insulted them.

Determining Our Need for Hospice Care

I finally decided that the one person that they would listen to was their primary care physician. So, I called the doctor and asked him if he would recommend that my Dad go on hospice. He and I had not spoken about hospice before and I may have been the first family member to ever make this request.

I explained the situation for my folks and empathized with his own challenge when “management” of the various health issues moved into an unsatisfying life.

No, my father did not have a “terminal diagnosis” other than his age. He had congestive heart failure as a result of heart bypass surgery when he was 81, but no one yet told him that it was a terminal condition.

As he continued to decline, his trusted physician had nothing more to offer. My father was 86 and Dottie was 84. It was time to do something different if life was to be eased for them.

The Physician agreed to make the recommendation without letting them know that I had called them. He actually found the suggestion helpful for him, too.

What I knew about hospice was that it was under-used. That patients would go into hospice maybe 2-3 days prior to death. And, had they gone in earlier, the process might have been much easier. The outcome was the outcome. People died, but it did not have to be so very difficult for everyone.

I knew that Hospice nurses and chaplains were the most compassionate of caregivers, that they were, in many ways, ‘doulas’ to the next life.  I also knew that not everyone could do this work, that they were and are exceptional.

For my Dad, we did not talk about a timeline to ‘the end.’ We all knew that this decision was about his declining health which was irreversible. His many falls resulted in total depression and isolation, leaving the burden of daily decision making to Dottie. While they could manage most of the “activities of daily living,” this was not the life they knew or wanted. And, they also knew it was not going to improve.

The Hospice and Palliative Care Process

I was with both my father and Dottie when the Hospice worker interviewed him. The interview took over 2 hours, and I am not even sure if my father fully understood all of the questions they asked. He always said that he did not want ‘extraordinary measures’ taken if he died. But, this time, when asked, he said he wanted to be “helped.” That is why I knew he did not understand what he was being asked (and I knew that as the social worker tried to ask the questions related to a Do-Not-Resuscitate order when my Dad could not understand, she asked, “If something happens and you stop breathing, do you want us to help you or not?”). I am sure this was not the first time confusion reigned.

The entire process from signing up for hospice until the first volunteer arrived was only a few hours. In Detroit, the Jewish Hospice is extraordinary, as are all hospices in every city and faith. The discussion felt familiar, loving, and was most comforting. It was all about what my father and Dottie wanted right now, not in the distant future.

It was so very present in time. Things started to feel safer for everyone involved.

When the Inevitable Happens

Even with the additional attention and help a few weeks later Dottie was feeling so stressed that the social worker recommended she think about respite care for a weekend. She and my Dad talked about it and he was willing to do whatever she needed. So, he was admitted into a long-term care facility near their home for a short stay.

When they arrived at the facility, Dottie immediately told the nurses that my Dad needed a chair or rails next to the bed to prevent him from falling. At this point, his falls were well known to the local REMSA team. Dottie explained that he would often forget that he could not walk, would try to get out of bed, and fall.

The nurses explained that in Michigan, bed rails are considered restraints and were not used. In reality, they could do nothing until he was evaluated.

After a couple of hours, exhausted, Dottie reluctantly went home.

Within 30 minutes of Dottie leaving for the evening, the inevitable happened. My Dad tried to get up, fell, and fractured his hip.

We already knew that he could not go through surgery and successfully rehabilitate. So, we elected to not operate. Initially, he was over-medicated, but we were able to reduce the medication substantially.

With the fracture, he could not walk or turn over by himself. Using a lift, the staff would move him to a Geri Chair where he would remain unless he requested to go back to bed.

As time went on, he stopped eating, even his favorite foods. He hated the thickened water given to those who have trouble swallowing.

The daily routine was that Dottie came every day with clean clothes, sat with him during meals to try to help him eat – just watched over him until after dinner – then it would start over the next day.

He had visitors until visiting was too difficult for him.

He was bedridden for the next four months until he died from an infection which began as a pressure sore. His system was so weak, there was no fighting this for him.

During those four months, the hospice staff stayed in touch with Dottie. The Rabbi came to see my Dad and often a volunteer was sitting with him. Dallas and I came as often as we could, playing music for him, just spending hours with him. I bought a small lap harp so I could play for him.

His physician of over 20 years never saw him again from the minute he recommended hospice.

I’m sharing my Father’s story because November is Palliative Care and Hospice month.

Palliative care and hospice are siblings, but not twins. They both are about relieving suffering, about comfort and caring. Still, they are distinctly different in their goals and focus. Palliative care can be provided at the time of treatment or any time thereafter; hospice care begins after treatment is discontinued. What they have in common is the human experience that moves into an extraordinary time of life when living becomes both precious and precarious.

As we celebrate Thanksgiving this year, let us also celebrate the many seasons of life and those who help us navigate them. This month so many have died violently, whether by gunshot or by uncontrolled wildfires. And, those of us who remain are burdened with learning again how fragile life is.

Palliative care allows us to make decisions now for ‘then.’ Hospice helps us live through the ‘then.’

And now, I leave you with a Haiku that, for me, speaks to the sacred space that palliative care and hospice creates. 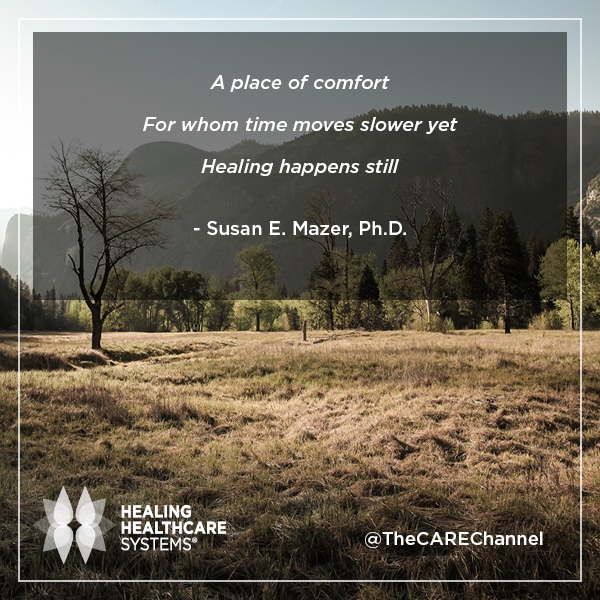 If you enjoyed this, you might also enjoy these posts: