Nursing in Crisis or Conflict: From Nightingale to Today 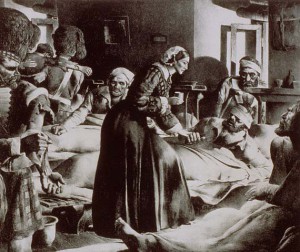 Florence Nightingale in the Crimean War

The professionalism and dedication of nursing began in times of war.  Florence Nightingale and her team of 35 nurses confronted a 42% mortality rate in the Crimea in the 1800s.  They saved lives and struggled to change a conservative medical system.  Their work reduced the mortality rate to 2%.

In keeping with that tradition, today’s nurses are also called upon to serve during world conflicts and pandemics, to care, to take on the risks to themselves and their families, and to demonstrate the universality of human compassion and caring.

Spending three days with nurses from the Middle East — from the core of conflict on both sides of geo-political violence — pushes my understanding of their courage far beyond where it was.

In many parts of the world, nursing is happening in the midst of a crisis or ongoing conflict.

Nurses in the Occupied Palestinian Territories (OPT) spoke of insufficient medication and resources; of refugees from Syria filling their hospitals and continuing to need emergency care.  Israel continues to treat Syrians and others who cross their borders in need of help.  And, Israeli nurses spoke of incoming rockets and wounded; being ordered to leave their patients and go to bomb shelters, which many refused to do.

At the same time, all the nurses were concerned about their own families and communities.

There is, indeed, a universality about nursing that denies political differences. A patient is not just a patient; he or she is ”my patient” to the nurse at the bedside.

The news media has been focused on a 45-minute power outage that happened in the West Bank of the Palestinian Territories recently because of unpaid power bills (in the millions of dollars). But this is just a single issue amidst so many others. Not unlike Nightingale’s challenges, there are medication shortages, physician and nurse shortages, and geo-political struggles that are life threatening.

And, nurses who work in East Jerusalem and the OPT keep showing up and caring for their patients despite not being paid in months.

These nurses continue to educate and care for new mothers and their infants. They continue to be concerned about genetically transferred illnesses and teenage pregnancies (within marriage).

Vaccinations remain a challenge, with the risks of communicable diseases being constant. Lack of midwives and inconsistencies in available resources between hospitals and clinics in occupied Palestine and those in Israel are a daily challenge.

In both Israel and the Palestinian Territories, health insurance is not so much the issue because these countries have universal healthcare. However, disease, injury, suffering is never about the money, and the money is not what heals.

Being a nurse has neither nationality nor bias; it is always about our shared humanity — about the relief of suffering and human caring.  Dr. Jean Watson states it clearly: “Caring is the essence of nursing.”

The Nightingale Initiative for Global Health has taken on the celebration of nursing around the globe and informing and empowering nurses and other healthcare workers and educators to become “21st Century Nightingales” — working in the local, national, and global community to build a healthy world.

If you have not done so, join the thousands of nurses across the world in signing the Nightingale Declaration.