Hurricane Harvey: Did Houston Have a Massive Stroke? 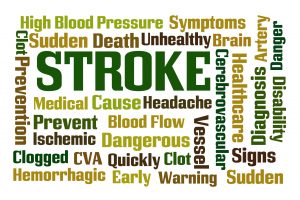 Looking at the word cloud, STROKE, the words that stand out include danger, disability, prevention, signs, early warning.

This pretty much covers a current discussion and practice to prevent strokes, diagnose and treat as soon as possible, and minimize long-term damage.

Strokes can be catastrophic. They can cause a loss of personhood, with the damage to the brain being so dramatic that the person who was, is no more.

The aftermath of Hurricane Harvey may be similar to that of a massive stroke. I use the metaphor of a stroke because heart attacks can feel like temporary setbacks.

But strokes often cause patients and families to rethink everything, rebuild everything, and renew their values going forward.

In that sense, the Southeast Gulf Coast experienced a massive stroke.

The Aftermath of Harvey

In Houston, where over 2 million people reside, the infrastructure damage is almost unfathomable. In a city totaling 656 square miles, compromised roads, bridges and highways will limit residents’ ability to move around and make their livings.

Preliminary estimates indicate between 30,000 and 40,000 homes were completely destroyed, and more than 100,000 were damaged. 1,000,000 cars were lost. And yet, with all the devastation, Houstonians, and people all along the Gulf Coast found each other.

Texas is a wealthy state, but not everyone is wealthy. It is known for thriving on oil, but not all Texans thrive on oil.

Like all urban areas, Houston has a wide span of an economic landscape that ranges from abject poverty to billionaires. Hurricane Harvey did not care if the person in its path was rich or poor. It just came.

Many of our cities, hospitals, and communities have experienced catastrophic hurricanes, tornadoes, fires, and civil unrest. To prevent a condition from becoming chronic, it is critical to be very intentional in handling it in its acute stage.

Rebuilding must also be about prevention.

Speak to anyone who works in rehab, and they will say that for a stroke patient, recovery is over a lifetime, with the first steps being survival and prevention. Stabilize a patient, provide medications that will remove imminent risks of another stroke.

Then, the question is living in that prevention and regeneration. That takes a lifetime.

And, so it is for all of us. We get through a crisis, then must invest by taking seriously the risks at hand, and strengthen our defenses to minimize damage.

We do not know the health outcomes of this crisis.

The future of a community following a dramatic event, such as Harvey, Katrina, or Sandy, reflects the resilience of those within it.

Hope is contagious. Let it become infectious in supporting everyone, all of us.