Health and Healthcare in India 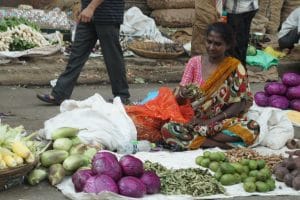 Every day along the streets of Mumbai, people sell produce brought straight from the farm.

My recent trip to India was not my first one. In 2002, I went to Delhi and was driven to Agra to see the Taj Mahal.  Every other trip has been to Mumbai.

My husband Dallas Smith has been to India so many times that he can no longer remember how many. Despite this, we still want to know more about India’s healthcare system for over one billion people.  And, we hunger for the food, the music, and the culture.

There are two healthcare systems in India: public and private. This is true all over Europe and Asia.

It is also becoming true in the U.S. with concierge medicine and the options to pay cash vs the un-insured and under-insured. (Although getting an accurate invoice for the costs of procedures is still a challenge!)

India is now more urbanized and because of that, public hospitals in the larger cities, like Mumbai, are under-staffed and under-funded.  Seventy percent of the population has no health insurance because it’s not a model that has been widely adopted.

The government only pays for hospitalization and associated expenses. Thus, out of pocket expenses for the wider population are very high.  And, there is a mixed willingness to pay for healthcare services, based on religious beliefs, myths, and cost.

There was talk about establishing universal healthcare in all of India by 2017, but that didn’t happen.  Now the date has been reset to 2020.

However, there is inadequate movement toward this.  Chronic diseases are rampant in the rural areas and healthcare clinics are far away. Many healthcare workers have little or no training, including practicing doctors.

A friend in India who has worked as a police officer for years told me that the government recently surveyed 450,000 police officers about their health.  They found high levels of hypertension, diabetes, and alcoholism.

As a result, they started a yoga program but do not allow for time for officers to do it during their work shifts.  They have also found that police officers have no time or place to go to the bathroom. (Welcome to India!) Thus, they have kidney problems.  They are working on that, too.

In India, either you are living on sparkling clean marble floors, or on the ground.

There is a burgeoning middle class, but the very poor — those living in the amazing and famous slums of India, are not counted in any class. The slums, which house millions, have common wells for water, no real sewer system, and the crowding is beyond what a Westerner would tolerate under the worst situation.

Thus, the poorest of the poor remain off the economic ladder rather than on the lowest rung.  And while there is a desire to do something about housing, most of the new construction serves the upper five percent of the population who are not in need of housing.

Food is relatively cheap, though. So, I did not see nor hear of anyone starving.  Whether chai or dosa, curries or chapati, it is everywhere, every day. And, of course, Indian food in India is the best.

What is very clear is that cleanliness, which is so valued in the West and carried to an extreme among the wealthy in India, is a low priority. Walking barefoot in the streets is not only common but done from birth.

I watched mothers wash their infants in pails found on the street. With no soap.  Again, on the same streets, there are varied classes dressed in suits, saris, and silver chemise —  walking together with those who are barefoot.

At the same time, people smile, are generous, and are active. In many ways, they fearlessly move within and among the mass of humanity with whom they live daily.

More About Healthcare in India

Clinics for single physicians are everywhere in some way, but hard to believe as a Westerner as they look like the other storefronts.

There is vast undernourishment and stunted growth among the urban and rural poor.

There are many vegetarian restaurants, as the Hindus do not eat beef (cows are sacred) and Jains do not eat anything living, including root vegetables.

Maternal care is getting better but remains a challenge.  Recent statistics put maternal deaths in India at 56,000 per year.  Issues include access, understanding rights and services available, and the basic inequities between cities and the rural villages.

Not unlike the U.S., the women who have many children in short order, within a year or two between infants, are poor and uneducated.  When you see these women with their infants on the streets, the men are frequently not around.

According to the people we met, it is against the law to take patients off life-support.  However, if the government decides not to stop paying for the cost of keeping them on life-support, it may happen anyway.

What does this all have to do with healthcare in the U.S.?  Seeing and knowing how others deal with the same issues such as lack of access, lack of health insurance, as well as inequities around all quality of life issues widens our worldview.

It also makes me realize that with all the money we have the U.S., we still cannot take care of ourselves.