The Many Languages of Belize

It was early. The sun was just peaking up over the horizon, emblazoning the sky with vibrant pinks and reds along Ambergris Caye. But it was already hot. Hot and humid.

Sweat dampened the brim of my hat as I lined up the classic Caribbean shot: a lone palm tree, swaying in the breeze on a fluffy white sandy beach, the ocean stretching out beyond it in various light greens, turquoise, and blue hues. 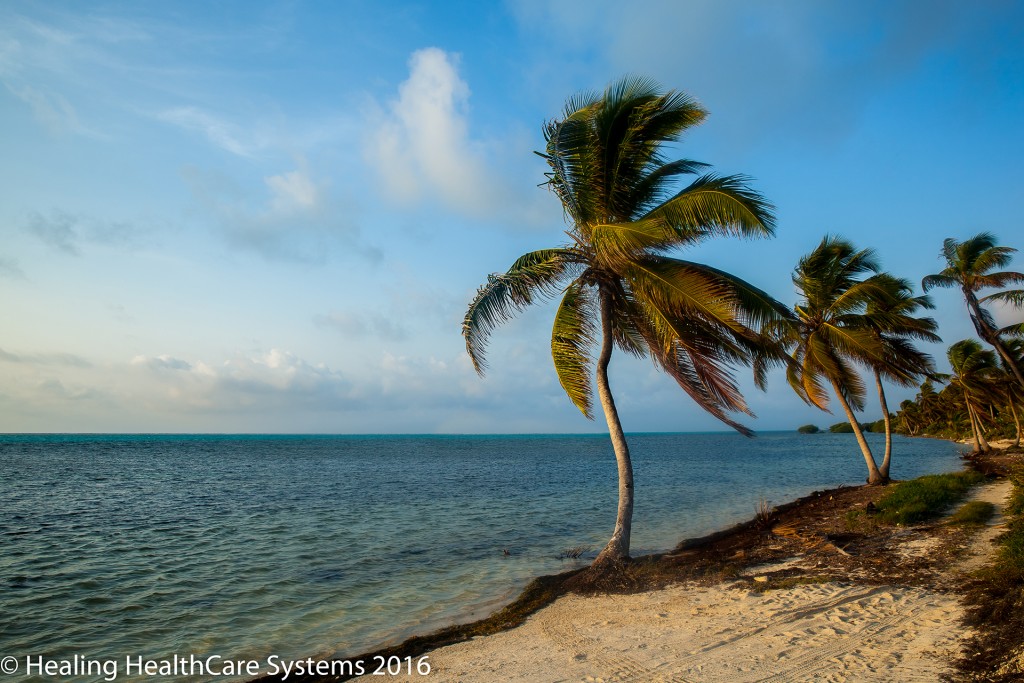 From behind me I heard someone speak in a heavy, almost Jamaican accent, “Hey mon, that’s some heavy gear mon.”

Two local men with machetes were walking up and down the beach, chopping down coconuts.

“You have breakfast mon? Looks like you could use a coconut.” The taller of the two — a dark, lanky man, dreadlocks hanging down his back — took a coconut they had collected, and, in a few deft chops, cut a perfect little drinking hole and tossed it to me. “Here, cool down mon,” he said. 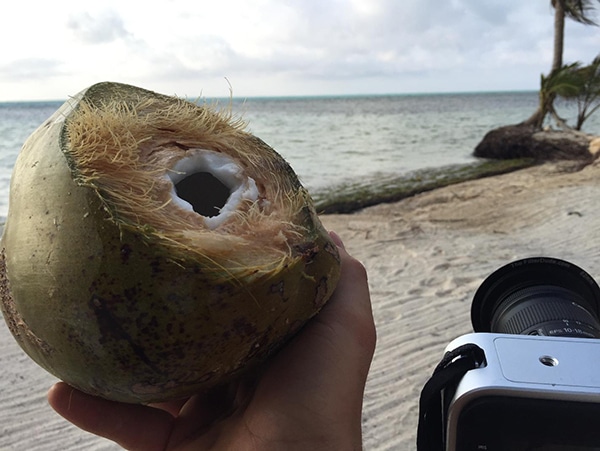 We chatted a little and I asked about his accent, one that seemed different than what we had heard in San Ignacio the night before.

I learned that Belize is a mix of cultures. The people are descendants of the native Mayans, settlers from the slave trade, and Spanish conquistadors. They speak many languages.

I sat and savored the mildly sweet coconut juice as my new friends continued down the beach. Suddenly I realized that they were scavenging the trash that washes in from the ocean every morning spoiling the beautiful views. The coconuts were literally their breakfast.

As I watched the two men, staff from the resort that owned the beach I was on came out with a wheelbarrow and began cleaning the beach of trash and seaweed. They cleaned right up to the edge of the resort property, leaving a hard line between their pristine white sand and the overgrown coast where the two men scavenged trash.

The scene provided a striking metaphor for what I would come to learn. Belize is not just a mix of where people are from, but where they come from. They speak many languages, but none more distinct than that of the have and the have not’s.

From the moment we stepped out of the plane we knew this would be a different shoot. We had been in humidity before, but this — it hit me like a wall of water. Throughout our time in Belize, it would often feel like we were hiking with a hot, wet cloth over our mouths.

While hiking, sweat would drip from our bodies like a leaky faucet, permeating everything. You get to a point where you can’t wipe it off because there’s nothing dry to wipe it off with.

After a few days, so much moisture had collected in our packs that we had to wait for our lenses to de-fog every time we took them out for a shot. Wiping with a lens cloth was utterly useless.

Once we took a moment to mentally deal with it (because things could be worse than spending your work week in Belize), the poverty hit us next. The drive to San Ignacio was a bit of an eye opener.

At this point we have traveled quite a bit, but for the first time it truly felt like we were in unfamiliar territory. 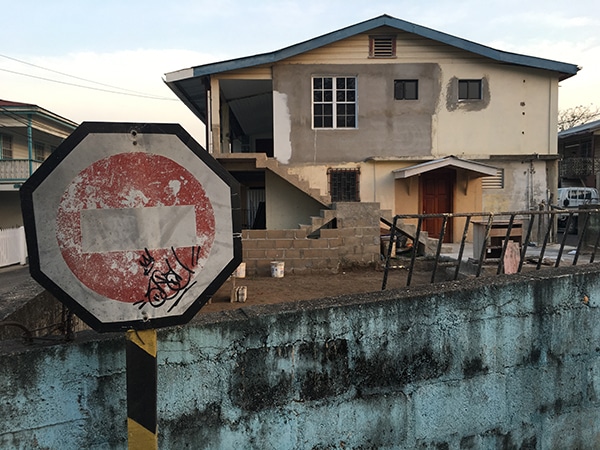 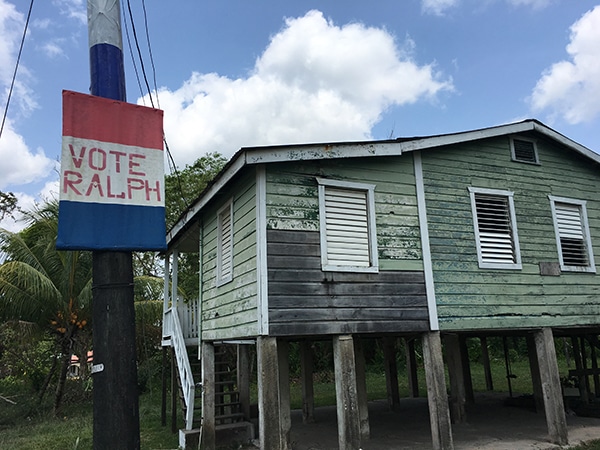 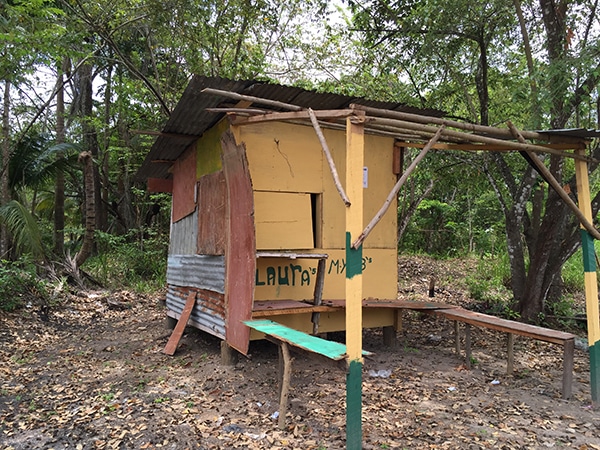 There were shacks built from driftwood and scraps next to resorts. People on the side of the road waiting for rides home from working the various citrus orchards. In Hopkins, we watched local children collect fruit from scattered wild Cashew trees to bring home.

Quick fact — did you know that cashews actually hang from the bottom of a fruit? They must be dried and roasted before they are edible. 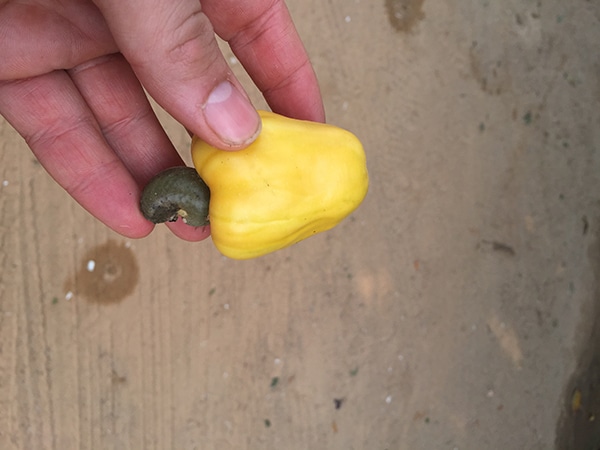 Despite this level of poverty, the Belizean people still all seem so happy and kind. Even the homeless seem happy to help the wayward tourist.

Of course, you are often hit up for tips for said help.

While in search of food on our first day in Belize city, we were approached by a scrawny, scruffy bearded man whose face was aged and wrinkled by too much sun. In an accent that seemed to get tangled in his toothless yet happy grin he told us, “Come, you don’t eat street food. Too dirty. Let grandpa Frank take care of you.”

At first we were a bit nervous following this elderly, obviously homeless man through alleys that screamed “do not go here” to our American sensibilities. But there was something comforting about Frank. At one time he was a police officer. Now he is homeless, leading tourists to a restaurant out of the city center for free beers.

It’s something I noticed about the Belizean people. They don’t let their hardships define them.

Everyone finds one way or another to get by. Even if you aren’t tipping them for the random and surprising massage while waiting in line by the docks, running beers from convenience stores to lounging tourists, or for giving you directions out in the street, they are still nice and willing to help.

Maybe it’s because of this excessive friendliness that I still had an uncomfortable, almost guilty feeling traveling there as an American. Even modest income Americans would live relatively well in Belize.

At our hotel bar on Ambergris Caye, we met an ex-pat living on meager savings from a life as an elementary school teacher. She told us she lived on next to nothing and tutored local children for beers. She had nothing, and bragged that it was the happiest she’d ever been.

Placing wealthy American tourists among impoverished Belizeans is quite the philosophical juxtaposition. The beach scavengers, our restaurant guide Frank, the teacher — they had no money, no possessions, but had their smile and a positive outlook on life.

Yet, in the final night at the one resort in which we stayed, I witnessed unhappy American tourists going off on the front desk staff for one minor slight or another.

They were tense and angry — oblivious to the laid back positive vibes floating on the tropical breeze around them. A trait I unfortunately recognized in my own experience in Belize. Whether stressing about locations falling through or fretting about the weather, I realized I often didn’t find myself in the moment in Belize either.

It was a stark reminder to focus on what was right with the current moment. I remembered something my beach scavenging friends had said.

As they walked away, leaving me to enjoy my coconut, I asked them how they could seem so happy living in a place where poverty and foreign wealth were in such stark contrast to each other. The response was rather simple.