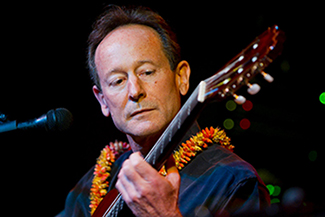 I am a composer/producer/guitarist who has been living on Hawaii Island (“The Big Island”) for the past 20 years, where the pristine beauty and relaxed lifestyle has certainly had an effect on my creative process. In many ways, the landscape of this island has influenced my music.

I’ve often thought that my compositions would sound quite different if they had been created while living in a large urban area. Where I live, one can drive for miles without seeing a house or another car, or easily hike to a remote beach. Musically, this is reflected in natural sounding acoustic recordings, with relatively sparse instrumentation; a style that is very compatible with The C.A.R.E. Channel.

I first became aware of The C.A.R.E. Channel through our local hospital, North Hawaii Community Hospital, which is known for its attention to creating and maintaining a total healing environment. While visiting a patient there, I couldn’t help but notice the beautiful, calming music. It was an honor to eventually be asked to share my music for broadcast on The C.A.R.E. Channel.

I am the owner of Lava Tracks Studio in Waimea. One of my compositions, “Hapuna Sunset,” was included in the soundtrack for the movie, “The Descendants.”

Currently, I am working on several recording projects for my record label, Palm Records, including the ninth CD for my acoustic guitar trio Kohala. We have developed a nice fan base in Japan over the years, and will be touring there again next year as well as performing on the U.S. mainland.

Creating music has been my life’s passion, and I feel very lucky to be able to spend every day doing what I love. The process of creating something using only my imagination is just as much fun for me now as it was when I first began my career. And as a bonus –it is a very rewarding feeling knowing that my music is having a positive effect on hospital patients around the country through The C.A.R.E. Channel.