Would You Like a Single or Double Patient Room? 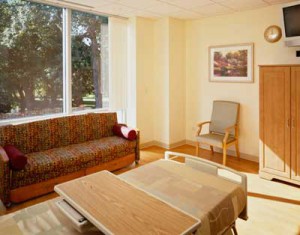 The biggest challenges of double occupancy are risks of infection, noise, and lack of privacy. But, it’s also challenging for two acutely ill individuals to use the same bathroom, agree on temperature control and lighting, and share the television. Particularly if there is only one television.

One person’s entertainment can be another person’s total annoyance.  Even if patients have their own individual TVs, the noise and distraction of competing programming can still be an issue.

For all these reasons, single patient rooms are the best option. But some of our clients with double patient rooms and one TV monitor report that The C.A.R.E. Channel actually helps roommates avoid conflicts over television programming. Because just about everyone loves nature and music.

And, hospital surveys have shown that some elderly patients actually prefer having a roommate.  Military hospitals also report that some wounded soldiers also don’t want to be alone in a hospital room, because they are used to being with their buddies on the battlefield.

The patient experience is increasingly becoming about choice. In an ideal world, patients would be informed of the issues and risks of a single or double patient room and then be able to choose.

What do you think?