Rains and Rainbows: How Mom Won 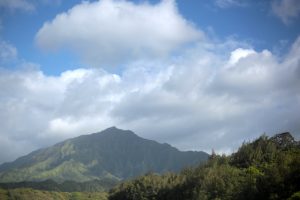 On Sunday, June 5th, 1983, my mother, Beatrice L. Mazer,  died of a heart attack, sparing her from the terminal cancer that the doctors were going to report to her the next day.  I use the word “spared” because that is how all of us felt.  My Mom skipped the pain, the anxiety, and the long and arduous process of dying from cancer.  She just blinked and was gone.   To this day, 28 years later, when we recount that day, we all agree that Mom “won.”

My Mother was an advocate for the underprivileged in Detroit, teaching in the inner city in a school that was at the heart of where the 1967 race riots ignited.  After teaching 12 years, she became and advocated for educators and schools, working full time for the Detroit Federation of Teachers as a mediator.   She began working with the teacher’s union when collective bargaining was a dream and teachers had neither job security, any benefits, and little real professional status.   She was also on the first Board of Directors of the Health Alliance Plan of Michigan (HAP), the largest HMO in Metropolitan Detroit.

Within my memories of her, I also find my recollection of the Detroit public schools when the worst offense a student could make was to wear a hat in school or chew gum.  It was a time when I could walk to school and, in high school, catch a public bus downtown to Cass Tech which was in the heart, again, of distressed neighborhoods.  And, we lived in integrated neighborhoods, went to integrated schools, and enjoyed the best of Jewish and African-American cultures.  I got a stunning education that took me to Stanford on a graduate fellowship.

In my mothers work with the DFT, she met Bernie and June Fieger, parents of Geoffry Fieger whose name became nationally known as the attorney for Dr. Jack Kevorkian.  Small world, when I think about it.

On June 3, 2011, Jack Kevorkian died.  As the New York Times reported of his life, “His stubborn and often intemperate advocacy for the right of the terminally ill to choose how they die is widely credited with sparking a boom in hospice care in the United States, and with making physicians more sympathetic to their pain and more willing to prescribe medication to relieve it.”   Today, my sister in law, Susan Talon Mazer, is a clinical nurse specialist working in palliative and hospice care.

I am not sure how I would have felt to be able to choose between helping my mother “skip” the dying process and going through the arduous and painful decline of cancer to reach the same outcome.  However,  I am as grateful today as I was then, that the spontaneous heart attack was her ticket out of what would have been a terrible death.     As my cousin, also a nurse, told me, she did not even know she died.

Healthcare today is tending to end of life issues so much more openly than was common 30 years ago…even if it is imperfect in accepting death as an inevitable outcome of life.   The costs involved in end of life care remain high not because dying is expensive, but because denying its inevitability levies extraordinary  human and economic costs.   When my Dad died just 5 years ago, it was not difficult to decide not to prescribe antibiotics when his body became septic as the result of a pressure wound (bedsore).  He was bedridden, never to walk again due to a hip fracture, and for him, the infection was a way out of a life that was no longer worth living.  We knew he had been waiting for some way to get out of where he was…and this was it. 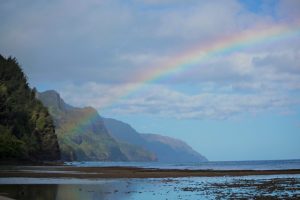 Rain makes rainbows. How could it be that easy?

In our time in Hawaii this month, the end of each rainstorm revealed a rainbow…and maybe that is how I would like it.  Lots of sound and lights…thunder and lightning…and then a rainbow.  Philosopher, Alan Watts, wrote, “Spring comes and the grass grows.” And with only these six single syllable words, he put into perspective how nature and life moves on without our permission.  During our  12 days in Hawaii,  it was sunny, warm, rainy, and wet.  And, aside from all the recent natural disasters, the political and economic threats around the globe and at home, the plants still grew, the flowers still bloomed, the waterfalls were rich and the rainbows shined gloriously.

This month, I share with you the views that we saw to remind you as nature reminded us:  Spring comes and the grass grows.  Life is. Enjoy the rainbows. 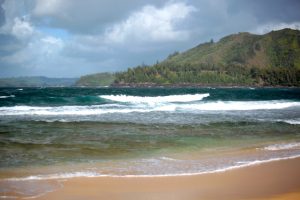 The waters wash the sands, the clouds decorate the sky...and we get to witness it all...