Detroit: When a City Moves Beyond Intensive Care 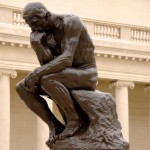 I just returned from visiting Detroit where I was born, bred, educated, and musically enriched. My high school, Cass Tech, was and remains one of the best in the country,the only Magnet school for 75 years until 1977 when more were introduced.

Motown was only a couple of miles from Cass Tech.  And, as everyone knows, the automobile industry was also born in Detroit as well as Vernor’s Ginger Ale.

I grew up going to performances of the Detroit Symphony Orchestra (DSO), who I just heard again last week. The DSO was and is still the music faculty at Wayne State University.

Detroit’s Institute of Arts is a world-class museum, with Rodin’s “The Thinker” gracing its steps. So you see, Detroit may be going through economic bankruptcy right now, but culturally it has never been richer.

My memorable musical and arts experiences growing up in Detroit have been tough to match as I have grown older.

Starting out as a musician, I moved into healthcare, taking with me all of this wealth of creative inspiration, the discipline of my earlier studies, and the grounded understanding of urban living and social conflicts.  Healthcare needs creativity, compassion for those different than we are, and fulfilling experiences of mentoring and being mentored.

Not far from family roots, my mother, Beatrice L. Mazer, was the Chairman of Board of Michigan Blue Cross and a member of the first board of directors of the Health Alliance Plan of Michigan (HAP), the largest HMO in the state.

The C.A.R.E. Channel is being broadcast in over 30 hospitals in Michigan, including major hospitals within and around Detroit. Because of this, I feel that a part of me still lives in my birth home. C.A.R.E. programming is a reflection of some of the nurturing and caring I was raised with — the musical and arts experiences in Detroit that taught and inspired me.

Right now, Detroit is going through a regeneration process.  Regeneration is key to successful living, working, and healing. It requires inspiration, hope, diligence, and faith.

Every day in hospitals, we see regeneration in patients who move through challenging surgeries and treatments to return to life anew. We also see it in our communities that are reborn after being devastated by hurricanes, fires, and violent tragedies.

I have great hope in the future of of the City of Detroit.  In healthcare terms, Detroit has been on life-support in an socioeconomic ICU.  As it recovers, which it is doing, it will again learn how to walk, gain the strength to carry its own weight, and ultimately thrive.